Virat Kohli is the best!! 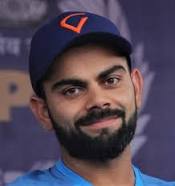 The video below is about when India lost to New Zealend in the World Cup Semi-final 2019.